If we kept barefoot  longer and resisted technology we would suffer less running injuries and enjoy ourselves more.

I find it difficult to turn off work mode. Stop looking at gait, looking out for pronation, supination, hip movement  - and just enjoy a walk in the park.  Living so close to the Meadows in Edinburgh gives me the opportunity to watch people move in all sorts of sports.

Sometimes I am shocked. I watched a football match, the boys involved would have been 9 or 10 years old, still at an age where they spent a lot of time just chasing the ball. One in particular caught my eye because he couldn't run. I am not sure what one might call the way he endeavoured to cover ground quickly but he had clearly lost touch with natural movement. He was impeccably kitted out with a new football shorts and shirt, big socks and his boots had some serious go faster logos on them. This clearly wasn't helping, because his bodyweight was so far back his legs reached forward in long strides so that he was braking his forward momentum by landing on his heel then he had to drag his bodyweight forward over his legs. He was ungainly and he looked uncomfortable. His arms were pumping in different directions and his face was a picture of concentration. He was working as hard as all the others, maybe harder and yet accomplishing less. 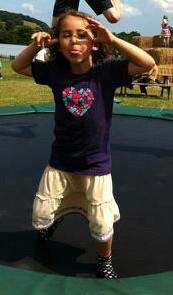 Later the same day my neighbour's 4  year old was on the trampoline, barefoot, she was bouncing and playing with her balance. She spied a friend arriving in the next garden crawled out of the netting and zipped across to meet her. I say zipped because unaffected by footwear or any external expectation of what running should be like this little one moved with amazing efficiency. Her bodyweight perfectly aligned, head directly above shoulders, hips directly below and  the pads of her foot seemed to barely touch the grass. Her arms hang at her chest and she moved so fast and with such joy. She could have taken on that 10 year old in his football boots and outrun him easily.  So when I ask myself where did it all go wrong and why do so many people get injured as they labour over their sport and fitness regime, I suppose the answer lies somewhere between the well kitted 10 year old who was so inefficiently labouring over his game, and the barefoot 4 year old who is just enjoying movement.

We don't need hi-tech help - we need to stay natural; it's this technique that will help bring back the joy of running and of comfortable pain free movement. Take the time to learn to run barefoot if you are getting injured or feel that you are labouring over your exercise rather than enjoying it. Contact me for barefoot coaching in Edinburgh. If you've already made that transition and want shoes use the code above to get yourself a discount. If you want to keep your children moving naturally Vivo do a great range of kids shoes at non profit prices.
Posted by Dynamic Balance at 22:39