We holiday for lots of reasons. A break from work, a change of scene, a change of pace, a chance to discover, to explore. We holiday for our mental and physical health. Holidays are often a reward for all the work and stress of modern life.

Holiday movement can often involve a lot eating, drinking and lazing. Movement wise that only involves bending at the elbow and rolling over. Some will use a holiday to do a massive amount of a single activity, e.g. cycle , ski, climb. In such cases holidays can be a time of self abuse rather than self nurturing . People go home needing to detox, sleep, hydrate exercise or call their massage therapist!

How does this help?

I need to recuperate and I take my holidays seriously. They are a recovery time where I can re-balance my energy and my body.  Some use holidays as a time to indulge
themselves and I do that, but not by over-eating, over-
drinking or over-strenuous physical challenges. Such things do not nurture a person, they are distractions. 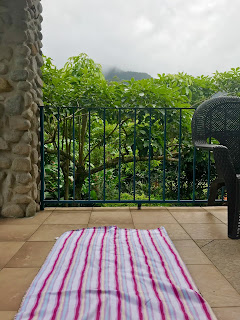 I find I like to indulge myself in healthy movement, explore delicious nutrition, I find time to be in nature, to earth myself and to be present. Finding time to stretch and breathe every day is a bigger reward than you can find in any bottle or sugar laden treat or large plate. Because you feel better afterwards not worse.

Bodies talk, learn to listen to yours. Do not be distracted by what you think you want. Your body will let you know what makes it feel good and what destroys its energy.

A morning stretch or yoga practice is always a good start.

Be active, challenge yourself with new activities but recuperate too. That means stretching out and encouraging good circulation and a full range of motion. Book a massage or a hot spa. 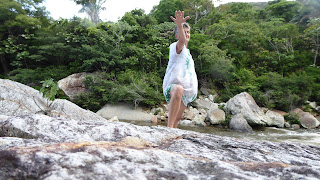 I am not preaching. I have done the overindulgence. I am inviting you to learn from my experience.
Come back from your hols feeling good. Not in need of a detox and some serious gym time.

In the last post I talked about how our daily lives - whether it be sitting in front of a monitor, welding, or bending over young children -involve a lot of repetitive action. The body adapts to this repetitive action by adding support for those often repeated moves. Our bodies intelligently strengthen the most used muscle systems and lay extra tissue where there is most stress.

Similarly if  we train for a sport our bodies adapt by adding strength where we require it. This highly intelligent adaptation allows us to train, become stronger, more efficient and highly skilled, but it has a couple of drawbacks.

The first issue is explained in the last blog. If we do not balance this adaptation process, things can go wrong.

The second is how this intelligent adaptation can inhibit us returning to full functionality after an injury.

Consider every movement that we perform as a set of neurological instructions. Imagine those instructions forming pathways in the nervous system. The paths we used most often become big open highways, well developed and easy to find. Newer movements are tiny little broken tracks until we perform them repeatedly and thus create bigger paths, which is in fact a movement skill. The more random movement we perform, the more track we lay, the more roads we build and the better we become at movement. This is movement intelligence.

So to illustrate how this goes wrong, a simple example would be:-

Seeley damages her right ankle. She has a plaster over the ankle and she has to hobble on her left leg and foot for some weeks. Seeley's left leg, ankle and foot become stronger, they adapt. She has effectively trained her left leg to work more. In time, Seeley becomes adept at hopping and hobbling, although her back may hurt initially from the uneven and unaccostomed strain. Once the plaster is removed the ankle is still painful. This is no big problem as Seeley has a strong left leg, it takes the strain when she climbs the stairs and lifts things. As time goes on Seeley's ankle becomes fully healed but by then Seeley is so accostomed to overusing the left side that she is still stepping from the left, lifting from the left and generally prefering that side. The right is weak and she has lost confidence in it.

Seeley' brain has made new nerurological paths, it has found new routes to make movement occur and as that has been happening a while those new routes have become dominant. They are her brain's preferred pathway.

The problem is that the added strain is now taking it's toll on her left side - the power in this side, now so much more than the other, is literally pulling her out of shape, stressing muscle and joint systems.
Seeley has recovered but she is in pain!

To bring dynamic balance back into her body, Seeley will have to mindfully work the weak side. She will have to force it to be the lead leg with focussed awareness and breathe until it becomes as strong as the now powerful left side.

Posted by Dynamic Balance at 09:56 No comments:

One of the reasons that we are so successful as a species is our ability to adapt: to environment, to circumstance and to the demands made on our bodies.

A simple example is starting a new job or activity that requires heavy lifting. This will result in some body discomfort for a short while but soon the body strengthens the most often used muscles. The body will add extra fascia on any structures that need strengthened. The body adapts.

I noticed another example at the massage course I have been running recently. The course is uncertified, but designed to give people a feel for how fascia systems work in the body. I teach them to look/feel for adaptations that are so powerful they pull the body out of shape. We then learn how to manually correct that tension.

The students always remark on how demanding the hands-on treatment is. Many are themselves in good physical shape, strong athletes who can run far and fast, they can be fitness instructors yet they find an hour of massage demanding to perform.

They have trained their bodies for their own chosen skill and it has adapted. They are often dismayed that they don't have the same strength that I have and wonder at my stamina. I too am well adapted for my activity, I would not be so strong at theirs!

When we move, exercise and train our bodies, we are encouraging them to adapt to the demands we put upon them. The human body adapts very well. This allows us to develop skills and strengths.

As I see it there are 2 problems with adaptation.

The first is if that adaptation/training is not balanced. Then the strong structure will pull others out of place and strain the opposing structure.

The second adaptation is about how we adapt to injury and fail to unadapt. More about this in the next Blog.

It is important to mindfully work towards a healthy balanced body. If you spend your working day at a terminal, shortening the front line of your body, make sure you do not choose only to train in a way that encourages this front line tension. Things like cycling and boxing will encourage front line tension. That is not to say they are bad activities. Like all they have merits but be aware of  their impact on your body and that you need to put some effort into balancing this if you are to be wothout injury. 8 hours in front of a terminal and an hour of these activities will cause a lot of adaptation that cannot be counteracted with a 3 minute stretch.! Try yoga, dance, acro, learn to handstand, climbing - anything that opens up the front of your body.

My advice always is to choose an activity that undoes the negative impacts of your most trained activity (remember that sometimes a sport involves repetitive activity). Once your body is balanced, you can do what you like.

Enjoy living in it!

Posted by Dynamic Balance at 13:19 No comments: